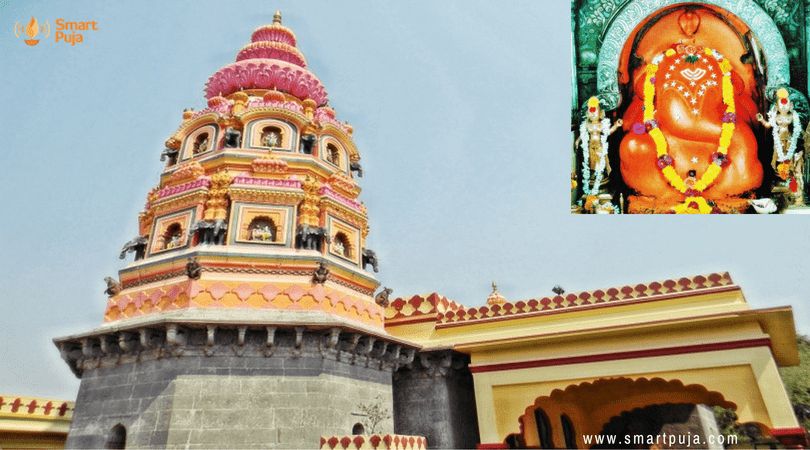 Legend
The demon Sindhu was the son of Chakrapani – the king of Mithila and his wife Ugra. Ugra conceived due to the power of a solar mantra from Surya bhagwan. Sindhu was given the ever-full bowl of amrita (elixir of life) as a boon from his father, Surya bhagwan. The demon was warned that he could drink from the bowl as long as it was intact. To protect the bowl, he swallowed it. Sindhu terrorized the three worlds, so the gods asked Ganesha for help. Ganesha defeated Sindhu’s army, cut his general Kamalasura into three pieces and then cut open Sindhu’s body, emptying the amrita bowl and thus killing the demon. Brahma is believed to have built the Morgaon shrine, and marrying Siddhi and Riddhi to Ganesha. At the end of this incarnation, Ganesha returned to his celestial abode, giving his peacock mount to his younger brother Skanda(Karthik), with whom the peacock mount is generally associated.

Architecture
The temple attracts the greatest number of pilgrims who consider Ganesha as the Supreme Being.
The temple has four gates, each facing a cardinal direction and with an image of Ganesha, each gate depicting him in the form that he appeared in each of the four ages (yugas). The image of Ballalvinayaka at the eastern gate, symbolises Dharma (righteousness, duty, ethnics). Vignesha at the southern gate,symbolises Artha (wealth and fame). Cintamani at the western gate, representing Kama (desire, love and sensual pleasure). And lastly Mahaganapati is at the northern gate representing moksha (salvation).

Ganesh Chaturthi festival in Moreshwar Temple
During Ganesh Chaturthi, devotees flock to the Moreshwar temple in large numbers. A procession of pilgrims arrives from the nearby Mangalmurti temple Chinchwad, with the palkhi of Ganesha. The Ganesha Chaturthi celebrations last for more than a month, until Ashvin Shukla (10th lunar day in the month of Ashvin) accompanied by fairs and celebrations. Moreshwar temple is the ultimate pilgrimage for a true Ganesha bhakth.