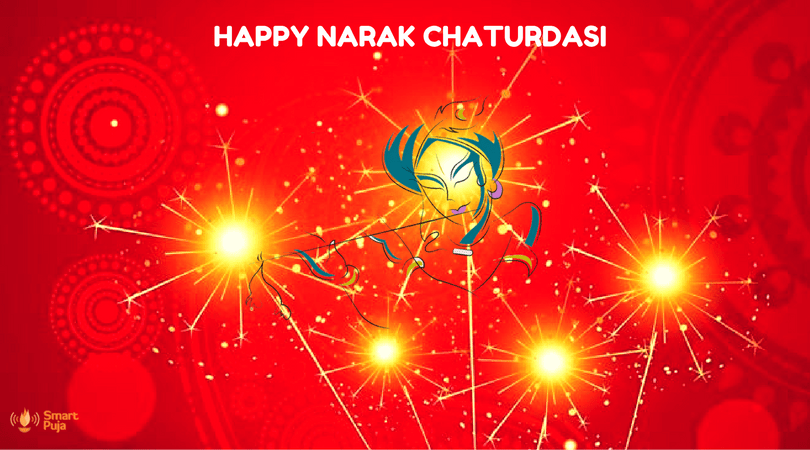 Narak Chaturdasi is celebrated a day before the main Diwali and a day after the Dhanteras. It falls at the 14th day in the month of Ashwin (October or November). It is celebrated to eliminate the idleness and evil from our life.
It is known by different names in different regions, namely – Kali Chaudas, Narak Chaudas, Narak Puja, or Roop Chaudas. However, the most well known name of this festival is Chhoti Diwali (small Diwali), as it falls a day before Diwali festival. 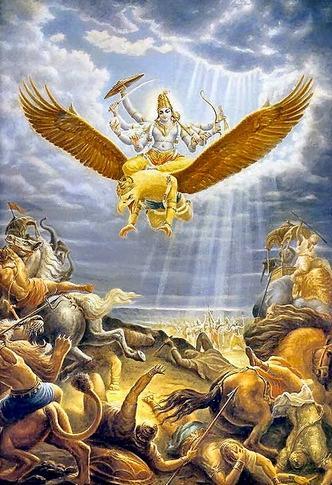 As per the legend associated with Narak Chaturdasi, there was a cruel demon named Narakasura who was the ruler of Pragjyotishpur. He defeated the Gods and imprisoned sixteen thousand daughters of the Gods and the sages. Unable to bear the tyranny of the demon, the celestial beings pleaded with Lord Krishna to save them from his torture. But Naraka had a boon that he would face death only at the hands of his mother Bhudevi. So, Krishna asks his wife Sathyabhama, the reincarnation of Bhudevi, to be his charioteer in the battle with Naraka.

Lord Krishna sat on his giant eagle named Garuda for this battle. As they approached the palace of Narakasura they realised that it was protected by magic. There were many more mystical barriers that Lord Krishna had to break before he entered the palace of Narakasura. Narakasura came out to fight with Lord Krishna. The battle between Naraka and Krishna shook the entire world. During the battle, an arrow hits Krishna and he acts being unconscious. When Satyabhama saw this she took the place of Lord Krishna and she killed Narakasura. This was because Narakasura had a boon that only mother Bhudevi could kill him. All the women who were taken captive by the cruel king were made free.

Before breathing his last, Narakasura requested Lord Krishna and his wife to forgive him. They both decided to forgive Narakasura and blessed him saying that his death will always be remembered and celebrated. It will be a day of joy and celebrations. This is exactly what happened. Even today this day is celebrated as the Naraka Chaturdasi.

The other story related to the celebration of the second day of Diwali is that of Maha Kali/Shakti. It is believed that on this day Kali killed the wicked Raktavija and this victory is remembered as Kali Chaudas.

Rituals of Naraka Chaturdasi
The most important ritual of the Naraka Chaturdasi is, people wake up early in the morning (before sunrise) or during moonrise, apply ubtan (made up of til oil, herbs, flowers, wheat flour & turmeric powder) on their body and take holy bath or Abhyang Snan. The bath of oil indicates the ritual that was followed by Lord Krishna, that was done after killing Narakasura.

Puja is done in every household. Lord Krishna is mostly worshiped on this day.  After the puja sweets are distributed to the family members and to those who attended the puja as prasad. Even snacks like chaklis, and other savoury items are made. In the evening people visit the houses of friends and family. Lamps are also placed in and around the houses. Fireworks are an integral part of the evening celebrations.  All these celebrations pave way to the more grand celebration of Diwali next day.