How many of us know about Lord Ganesha’s family? Lord Ganesha is more popularly known as a celibate however the scriptures that are dedicated to Lord Ganesha (the Ganesha Purana and the Mudgala Purana) provide information about his wives Siddhi and Buddhi (also called Riddhi). “Siddhi” means spiritual power and “Buddhi” means intellect. Since Lord Ganesha is believed to be the Lord of wisdom and spiritual knowledge, the consorts are befitting. According to the Ganesha Purana, Lord Brahma was performing a ritual in honour of Lord Ganesha and offered his prayers to him. Two of the offerings were his daughters, born from his mind, Siddhi and Buddhi that Lord Ganesha accepted graciously as his wives.

The Shiva Purana provides insight about Lord Ganesha’s two sons. There are some temples that have idols of Lord Ganesha placed with his wives and sons. Lord Brahma conducted the wedding of Lord Ganesha to Sidhi and Riddhi (also known as Buddhi). In due course of time Shubh and Labh were born. 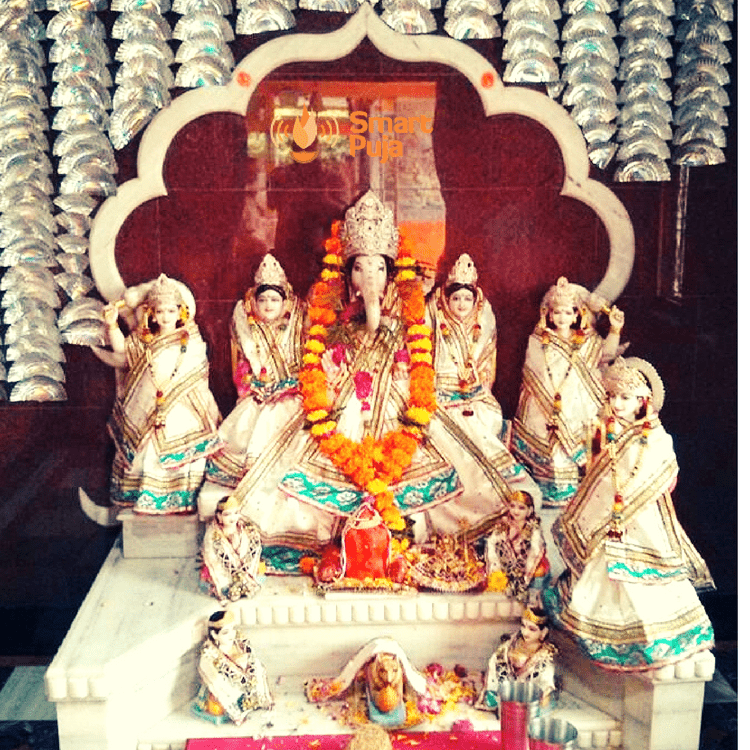 Shubh was born to Lord Ganesha and Riddhi. He is known as the God of prosperity. Labh was born to Siddhi and Lord Ganesha. Labh is the God of profit. Labh is also known as the giver of the biggest profit and Shubh is the protector of that bounty. Ganesha (wisdom) and Riddhi (Intellect) created Shubh (auspiciousness) and Ganesha (knowledge) and Siddhi (Spiritual well-being) created Labh (Profit). Intelligence as a quality can only be auspicious or work in favour of anyone, if guided with wisdom. Therefore Lord Ganesha is called the Lord or the owner of the attributes that his sons and wives have.

It is also known that Lord Ganesha had a daughter named Santoshi. Santoshi Maa is known as the goddess of satisfaction. Even though the myth is popular, there is no mention of Ganesha’s daughter in any of the scriptures. As mentioned the birth of Lord Ganesha’s son is given in the Shiva Purana. The story behind the birth of Santhoshi Maa starts with, when Ganesha’s sister Manasa celebrates the festival with him. His sons ask Ganesha to grant them a sister.

Although Ganeshaji initially refuses, upon the repeated pleas of his two wives Riddhi and Siddhi, sons, sister and the divine sage Narada, Ganesha creates Santoshi Mata through two flames rising from his wives’ breasts. Narada decreed that this mind-born daughter of Ganesha will always fulfill everyone’s desires and thus, would be called Santoshi Maa, the Mother of Satisfaction.

The story of Lord Ganesha’s sons, the attributes of Shubh and Labh are considered a reflection to that of Lord Ganesha. If we delve into ourselves we will realize that we are all Ganapatis (Gana is our body made of the Pancha-Mahabhuta (Five elements), Pati stands for master or owner)). Thus He shows us the way to achieve both intellect and wealth to enjoy a rewarding life.