“(When) the lamp is lit, darkness is dispelled. Where there is light of knowledge, ignorance is dispelled.” (Guru Granth Sahib p.791)

Diwali, the festival of lights, is celebrated all over India to signify Lord Rama’s return home from 14 years in exile after destroying the demon god Ravana. However, in the Sikh tradition Diwali has a very different, historically based, significance as well. In the Sikh struggle for freedom from the oppressive Mughal regime, the festival of ‘Bandi Chhor’ did become the second most important day after the Vaisakhi festival in April. 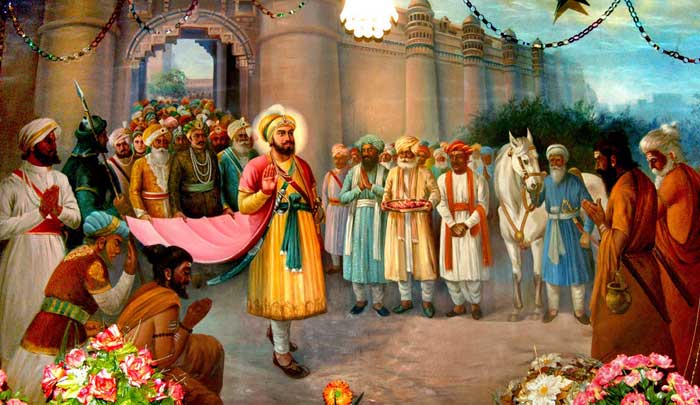 The sixth Guru of the Sikhs, Guru Hargobind, had been falsely imprisoned by the Mughal Emperor Jahangir and on Bandi Chhor Diwas, Guru Hargobind was released from Gwalior Fort Prison along with 52 kings and princes. The Guru arrived at Amritsar on Diwali day and people lit up the whole city with thousands of diyas and lamps and the Har Mandar (also known as the “Golden Temple”) was lit up too. He was received in the same way as Lord Rama was received in Ayodhya. The day came to be known as the ‘Bandi Chhor Divas’. The word “Bandi” means “imprisoned”, “Chhor” means “release” and “Divas” means “day” and together ‘Bandi Chhor Divas’ means ‘Prisoner Release Day’ or ‘The Day of Liberation’.

This day is very significant for people following Sikh religion. This festival can be best described in these words:

Oh Wonderful Lord! I neither desire for empire and material realm nor liberation or mukti, my soul longs for the love of your lotus feet.

On the day of the Guru’s realease, the 52 Rajas who were imprisoned in the fort as hostages for opposing the Mughal empire were dismayed that they were losing a spiritual mentor. Guru Hargobind agreed to be freed only if the other Indian chiefs (rajahs) imprisoned with him were freed also. Jahangir was under pressure from moderate but influential religious leaders like Hajrat Mian Mir, a friend of the Guru. So he relented and ordained, “Let those rajahs be freed who can hold on to the Guru’s coat tails and walk out of prison”. He had in mind no more than four or five being freed with the Guru.

The Guru delighted in this challenge by having his tailor make a special chola with 52 panels attached to it. At the appointed time, the Guru donned the heavy chola, which stretched for yards behind him. The 52 princes each grasped a panel; 26 on the right and 26 on the left. Walking behind the Guru, careful not to let go, they stepped out into the sunlight and freedom, to the cheers of the Guru’s Sikhs. From this time on, Guru Hargobind was known as Bandi (prison) Chhor (liberator) or ‘He who frees the captured’ and the day of liberation is celebrated as Bandi Chhor Divas.

The Guru had found a way to get 52 of the innocent leaders released from prison without a battle. The lives of 52 local kings had been saved without a single shot or use of swords/weapons. The kings were saved by having faith in the Guru and holding on to him.

Bandi Chhor Divas is celebrated with a fireworks display and The Golden Temple, as well as the whole complex, is decorated with thousands of shimmering lights, creating a unique jewel box effect. On this festive occasion, Nagar keertan (a street procession) is held and an Akhand paath (a continuous reading of Guru Granth Sahib)is done.
Pilgrims from all over the country visit Gurdwara Data Bandi Chorh Sahib situated in Gwalior to pay homage to Guru Hargobind.

What Guru Hargobind stood up for and represented can be summarized in one word – ‘Justice’. The Guru could have left the prison when he was offered the chance. The Guru thought of others before himself.
For Sikhs, Bandi Chhor Divas is the time of reflection, on whether one has held on to the Guru and followed His teachings or not. Sikhs all over the world, on this day, pray for enlightenment and freedom. These are the two most important spiritual and temporal goals for human society.