The Fourth day is of Diwali festival is Padwa or Govardhan Puja or Bali Pratipada. This day is also known as Varshapratipada which marks the coronation of King Vikramaditya. Vikaram-Samvat(Hindu Calendar) started from this Padwa day.

Govardhan Puja is celebrated on this day. Govardhan is a small hillock in Braj, near Mathura and on this day of Pratipada people  build cowdung hills, decorate them with flowers and worship them. 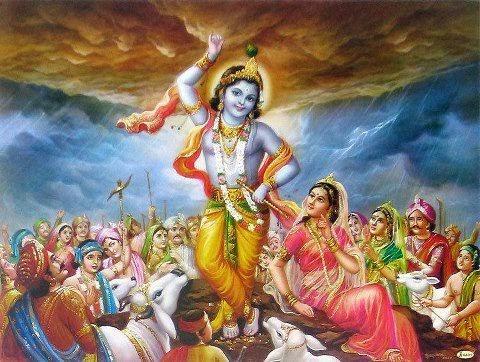 The Legend is that Lord Indra in terrific anger sent a deluge to submerge Gokul. But Krishna saved his Gokul by lifting up the Govardhan mountain with his little finger and holding it over the people as an umbrella. He saved and protected the lives of the people of Gokul from the Lord of Heaven, Indra.

People of Mathura commemorate this day as an Annakoot or Mountain of food. Pious people keep awake the whole night and cook fifty-six or 108 different types of food for the bhog (offering of food) to Krishna. In temples specially in Mathura and Nathadwara, the deities are given milkbath, dressed in shining attires with ornaments of dazzling diamonds, pearls, rubies and other precious stones. After the prayers and traditional worship innumerable varieties of delicious sweets are ceremoniously raised in the form of a mountain before the deities as “Bhog” and then the devotees approach the Mountain of Food and take Prasad from it.

This auspicious day of Diwali is also celebrated as Kedargauri Vratam (worship of goddess Kedar-Gauri – a form of Parvati), Gopuja (worship of cow), or Gouramma puja (worship of Gauri – another form of Parvati). This festival is celebrated by the farming community of Tamil Nadu and Karnataka. Before worship of cows, on this day, the goushala (cowshed) is also ceremoniously cleaned. On this day, a triangular shaped image of Bali, made out of cow-dung is placed over a wooden plank designed with colourful Kolam(Rangoli) decorations and bedecked with marigold flowers and worshiped. 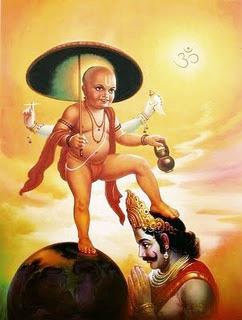 According to Hindu mythology, Bali, a Daitya king was well known for his bravery, uprightness and dedication to god Vishnu. He was benevolent and his popularity was only marred by the actions of his kinsmen who involved themselves with acts of pillaging and marauding against the gods who stood for righteousness and justice. But Bali was also considered as arrogant and the godly people did not like him for this. Bali was also considered invincible since he was a great devotee of Vishnu. The gods, upset by the harassment meted out to them by the asuras, and jealous of the popularity of Bali – sometimes glorified as Mahabali (“the great Bali”), approached Vishnu to help them to get rid of Bali.

Lord Vishnu takes the fifth avatar as Vamana, the dwarf Brahmin,then approached Bali seeking reverence and alms. Aware of the generous nature of Bali, Vamana appeared before him and sought a gift of three feet of land,from the king. Bali readily agreed because thinking that a 3-foot dwarf wouldn’t be able to cover much with three paces. The dwarf then assumed his huge universal form vishwarupa or “all pervading” and placed his first step forward, which occupied the entire universal space. With his second step he occupied the earth, except the space where Bali was standing. Since there was no other space available to put Vamana’s third step, Bali readily offered his own head for Vamana to put his third step, fully realising that the person who was asking for such gift was none other than Vishnu himself. Vishnu banished Bali to Patala, the nether-world.

Pleased with the generosity of Bali, Vishnu grants him a boon that he could return to earth for one day in a year to be with his people and light millions of lamps to dispel the darkness and ignorance and spread the radiance of love and wisdom. It is this day that is celebrated as the Bali Padyamior Bali Pratipada, the annual return of Bali from the netherworld to earth.

Diwali’s fourth day is celebrated across the country with different names,with various other significance attributed to each festival, however the underlying theme remains the same. Its the celebration of the victory of justice over injustice, light over darkness and ultimately victory of good over evil.