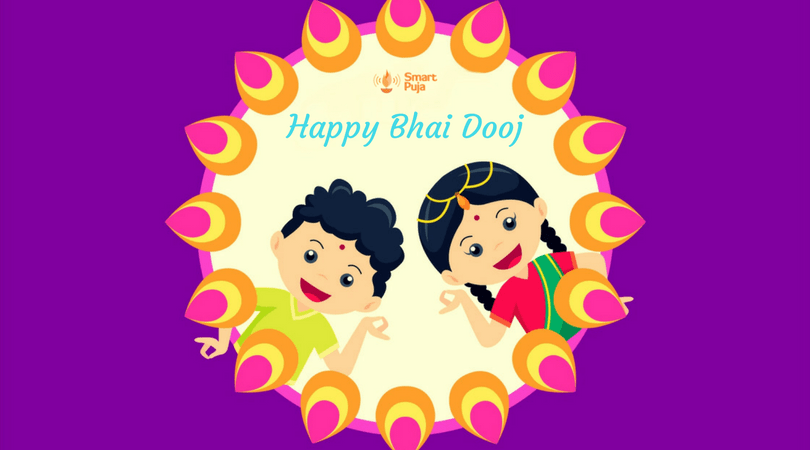 Every relationship possesses its own value, but the brother-sister relationship is quite unique and unmatched. Indian culture has manifested the greatness and glory of this relationship in many forms, out of which Bhai Dooj festival is an eminent form. This auspicious occasion also reveals the importance of siblings in someone’s life.
Bhai Dooj is celebrated in North India and the festival is popularly known as Bhai Bij, Bhaubeej or Bhav Bij amongst the Marathi speaking community in the states of Maharashtra and Goa. It’s called Bhai Phonta in Bengal and Bhai Tika in Nepal.It falls on the last day of the five day long festival of Diwali.

The occasion of Bhai Dooj provides a golden chance to a woman, bound in the clutches of her day to day routine, to go to her native place and meet her parents and siblings. This festival is like a homage to the pious brother-sister relationship and it also strengthens this bond further.

On the day of Bhai Dooj, sisters invite their brothers for a sumptuous meal and offer brothers’ their favorite dishes. Delectable Basundi Poori and Shrikhand Poori is relished along with several other festival special dishes. Sisters perform aarti for their brother and apply a red tika on the brother’s forehead. This tika ceremony on the occasion of Bhai Dooj signifies the sister’s sincerest prayers for the long and happy life of her brother. If a sister puts a tilak on her brother’s forehead, then no one can harm her brother. Sisters perform puja for their brothers safety and well being. In return brothers bless their sisters and treat them also with gifts or cash. Women who do not have a brother,worship the moon god instead. They apply mehendi on girls on this day

The sister, whose brother lives far away from her and cannot come to her house, sends her sincerest prayers for the long and happy life of her brother through the moon God. She performs aarti for the moon. This is the reason why children affectionately call the moon Chandamama.

Story behind the celebration of Bhai Dooj

One of the most commonly told legend of Bhai Dooj is the tale of Yamaraj, the Hindu mythological god of Death.  Yamaraj met his twin-sister Yami or Yamuna after a long period of separation. The day was ‘Dwitheya’ or ‘Dooj Day’ (second day after new moon). When Yami saw her brother after a long period of time, she was very happy and she welcomed Dharam Raj (Yama) wholeheartedly. She applied red tilak on his brother’s forehead and treated him with a sumptuous meal. Yamaraj was very happy receiving such a warm reception from his sister. It was due to this he announced that whosoever receives a teeka from his sister on the day of ‘Dooj’ will not be hurled to hell. Hence the day is also referred as Yamadwitheya.

The festival of Diwali is incomplete without Bhai Dooj. The essence of the Bhai Dooj festival is that it is celebrated to strengthen the love between brothers and sisters. It is a day of food-sharing, gift-giving and reaching out to the inner most depths of the hearts.