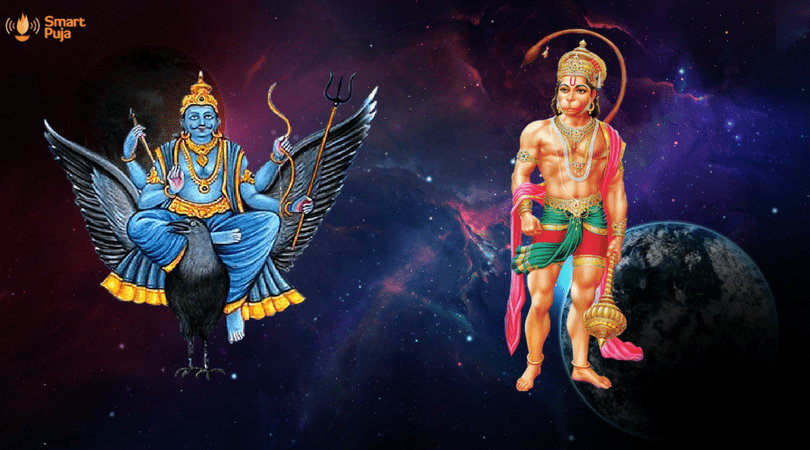 Shani Dev or Saturn is one of the Navagraha (Nine Planets). Shani Dev is considered to be the strongest malefic and a stern teacher who represents patience, effort, endeavour, and endurance; and who brings restrictions and misfortunes. He also is the greatest purifier who cleanses one’s soul of bad karma. It’s believed that no one can escape the wrath of Shani’s Drishti. It is said that worshiping Lord Hanuman will help in removing hardships caused by Shani Dosha. There is an interesting story which explains why worshipping Hanuman helps in overcoming Shani Dosha or Sade Sati. 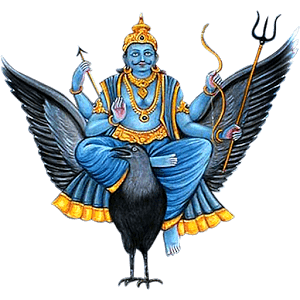 on-king of Lanka, had become too powerful and defeated all the Devas bringing all the grahas (planets in astrology) under his control. He kept these planets suppressed beneath his foot. Ravana was also a great astrologer. When his eldest son, Indrajit, was about to be born he forcefully kept all the grahas in the most favourable astrological position. The Devas were worried that if Ravana’s son was born in a favourable astrological position, he will be invincible. So they asked all the grahas (planets) to move from the favourable position. However they were unable to escape from the foothold of Ravana.

Shani Dev agreed to help provided he was able to glance upon Ravana’s face.There is a popular belief that Shani Drishti, or Shani’s glance, is as deadly as his position. Shani is believed to cast an evil eye and this causes deep trouble. The Devas sought Saint Narada’s help to inflict Shani’s Drishti on Ravana. Saint Narada reached Ravana’s palace  and saw Shani and other planets under the feet of Ravana. Narada praised Ravana’s victory over the grahas and suggested that he should stamp on their chest as this will be Ravana’s true symbol of victory and not on their back as he is doing now. 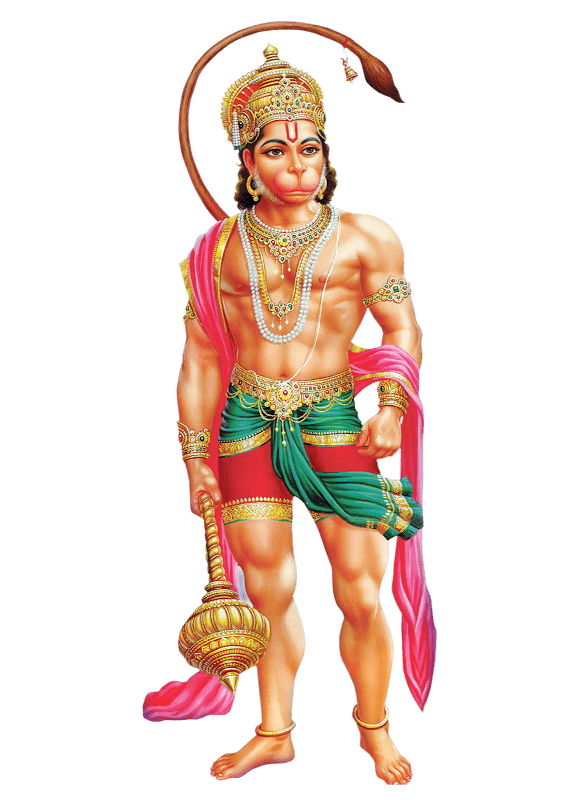 Ravana agreed to Narada’s observation and immediately got the planets turned around. As Shani turned around, his glance fell on Ravana’s face and thus kick-started his hardships. Ravana understood the ploy, got enraged and imprisoned Shani Dev. He locked him up in a tiny dark cell that had no opening.

After several years, when Lord Hanuman arrived in Lanka – as a messenger from Shri Ram to Mata Sita, he heard Shani’s cry from a dark cell. Hanuman broke open the prison and rescued Shani. Shani Dev thanked Hanuman for rescuing him and gave a boon in return. As boon, Hanuman asked Shani Dev not to trouble or cast evil eye on his devotees. To which Shani agreed. From that day people started worshiping Hanuman to escape or nullify effects of Shani’s Drishti.