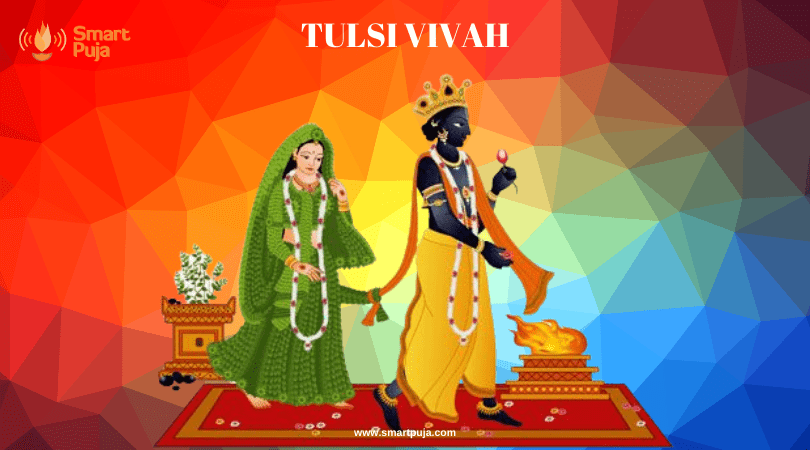 Tulsi Vivah is a Hindu festival in which a ceremonial marriage of the Tulsi with God Shaligram or Amla branch is held. The Tulsi wedding signifies the end of the monsoon and the beginning of the wedding season in Hinduism. The ceremonial festival is performed anytime between Prabodhini Ekadashi and Kartik Poornima.

Tulsi is venerated as a goddess in Hinduism and is sometimes considered as a wife of Vishnu, with the epithet, “Vishnupriya”, “the beloved of Vishnu”. The legend behind Tulsi Vivah and its rites are told in the scripture, Padma Purana.

According to Hindu scripture, the Tulsi plant was a woman named “Vrinda”. She was married to the Asura king Jalandhar, who due to her piety and devotion to Vishnu, became invincible. Even the Devtas could not defeat Jalandhar, so they requested Vishnu – the preserver in the Trinity – to find a solution. When leaving for war Vrinda promised Jalandhar for doing Sankalpa for his victory till he returns but Lord Vishnu disguised himself as Jalandhar and she saw him, she left her Sankalpa and touched his feet. With her Sankalpa destroyed, Jalandhar lost his power and was killed by Shiva and his head fell in Vrinda’s palace. Seeing this she realized it was not her husband but Lord Vishnu. Vrinda cursed Lord Vishnu to become Shaligram and to be separated from his wife, Lakshmi. This was later fulfilled when he was transformed into the black Shaligram stone (actually a fossil), and in his Rama avatar, was separated from his wife Sita, who was kidnapped by the asura king Ravana. Vrinda then drowned herself in the ocean, and the gods (or Vishnu himself) transferred her soul to a plant, which was henceforth called Tulsi.

As per a blessing by Vishnu to marry Vrinda in her next birth, Vishnu – in form of Shaligram – married Tulsi on Prabodhini Ekadashi. To commemorate this event, the ceremony of Tulsi Vivah is performed.