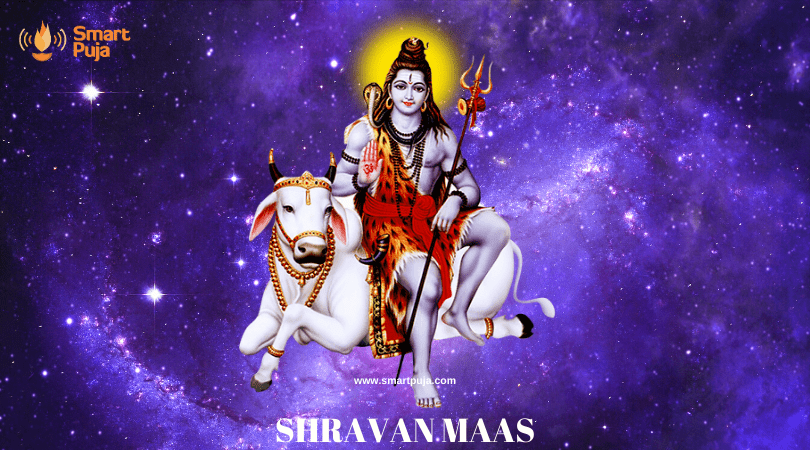 Shravan is the fifth month of the Hindu calendar, beginning in late July from the first day of the full moon and ending in the third week of August, the day of the next full moon. Shravan Maas is considered to be the holiest month of the year. During Shravan Maas, the cosmos is naturally charged with Shiva tattvas (elements) that purify the mind, the senses, the body and the self. It’s the best month to worship Lord Shiva with Rudrabhishek Puja.

According to the traditional Hindu calendar Shravan Month, Shravan Mahina or Shravan Maas (July – August) is one of the holiest months. Each region in India considers this month as holy and various vrats and rituals are performed during this month. All Somvars (Mondays) of Shravan month are specially observed with austerity as these days are devoted to the worship of Lord Shiva.

As per the legends, when Samudra Manthan (the churning of oceans) took place in the month of Shravan, a total 14 different types of exotic items came out. Thirteen of these were distributed among participants, except Halahal or poison (the 14th items which came out from samudra manthan). Lord Shiva drank the Halahal and stored it in his throat, hence the name Neelkantha (meaning blue throat) is attributed to Lord Shiva. In order to reduce the strong effect of this poison, Lord Shiva wore the crescent moon on his head. Thereafter all the Gods started offering Ganges water to cool Lord Shiva and to alleviate the ill effects of the Halahal (poison). Since this happened in the month of Shravana, the devotees of Lord Shiva devotees offer Abhishekam (ritual bathing) to Lord Shiva in this month.

In this holy month, Rudra Abhishek would be carried out with chants of Rudram. Abhisheka of Shiva linga with different juices and holy liquids will be performed for the entire duration of Puja. Shri Rudram is the oldest listing of various names of Lord Shiva. Through the chanting of Sri Rudram, the various attributes and aspects of Lord Shiva are invoked and worshipped. By the power of Shri Rudram, the unmarried find ideal mates, the sick become well, wealth & power is showered, debts are removed and death is evaded. With this Rudram chanting, patterns and karmas get detached from you. Basically, chanting of Sri Rudram is a direct way to Enlightenment. It is believed that the one who worships Lord Shiva in the month of Shravan is freed from all bondages and sins of Karma and gets Moksha.