Jagannath Puri Rath Yatra (Festival of Chariots) is one of the most awaited and celebrated festivals in India. This annual festival is celebrated on Ashadha Shukla Paksha dwitiya tithi in Puri, Orrisa. This year the holy festival is being celebrated on 14th July 2018. Puri Rath Yatra is dedicated to Lord Jagannath i.e. Lord Krishna, his sister Goddess Subhadra and his elder brother Lord Balabhadra. It is commonly known as Gundicha Yatra, Dasavatara, Chariot Festival and Navadina Yatra.

The festival commemorates Jagannath’s annual visit to Gundicha Mata Temple via Mausi Maa Temple (aunt’s home) near Balagandi Chaka, Puri. As part of Ratha Yatra, the deitis are taken out in a procession to Gundicha Temple and remain there for nine days.They are also accompanied by Sudarshana chakra. Then the deities or Ratha Yatra return to the Main temple. The return journey of Puri Jagannath Ratha Yatra is known as Bahuda Jatra.

Three richly decorated chariots, resembling temple structures, are pulled through the streets of Puri called Badadanda. This commemorates the annual journey of Lord Jagannath, Lord Balabhadra, and their sister Subhadra to their aunt’s temple, the Gundicha Temple which is situated at a distance of 2 km from their temple. This is the only day when devotees who are not allowed in the temple premises, such as non-Hindus and foreigners, can get their glimpse of the deities. During the festival, devotees from all over the world go to Puri with an earnest desire to help pulling the Lords’ chariots with the help of other priests pulling the chariots with ropes. They consider this auspicious deed and risk their lives in the huge crowd. The huge processions accompanying the chariots play devotional songs with drums, tambourines, trumpets etc. Children line the streets through which the chariot will pass and add to the mass chorus.

The three chariots of Balabhadra, Subhadra and Jagannatha are newly constructed every year with wood of specified trees like phassi, dhausa, etc. They are customarily brought from the ex-princely state of Dasapalla by a specialist team of carpenters who have hereditary rights and privileges for the same. The logs are traditionally set afloat as rafts in the river Mahanadi. These are collected near Puri and then transported by road.

The three chariots are decorated as per the unique scheme prescribed and followed for centuries stand on the Bada Danda, the Grand Avenue. Covered with bright canopies made of stripes of red cloth and combined with those of black, yellow and blue colours, the huge chariots are lined across the wide avenue in front of the majestic temple close to its eastern entrance, which is also known as the Sinhadwara or the Lion’s Gate. 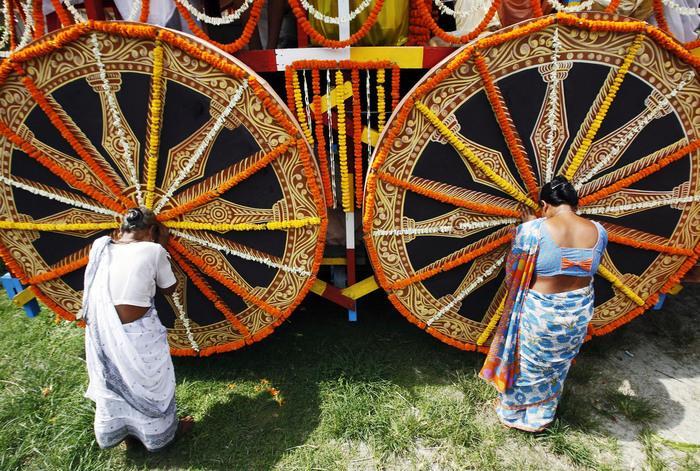 Lord Jagannath’s chariot is called Nandighosa. It is forty-five feet high and forty-five feet square at the wheel level. It has sixteen wheels, each of seven-foot diameter, and is decked with a cover made of red and yellow cloth. Lord Jagannath is identified with Krishna, who is also known as Pitambara, the one attired in golden yellow robes and hence the distinguishing yellow stripes on the canopy of this chariot.  The chariot of Lord Balarama, called the Taladhwaja, is the one with the Palm Tree on its flag. It has fourteen wheels, each of seven-foot diameter and is covered with red and blue cloth. Its height is forty-four feet.
The chariot of Subhadra, known as Dwarpadalana, literally “trampler of pride,” is forty-three feet high with twelve wheels, each of seven-foot diameter. This chariot is decked with a covering of red and black cloth – black being traditionally associated with Shakti and the Mother Goddess.