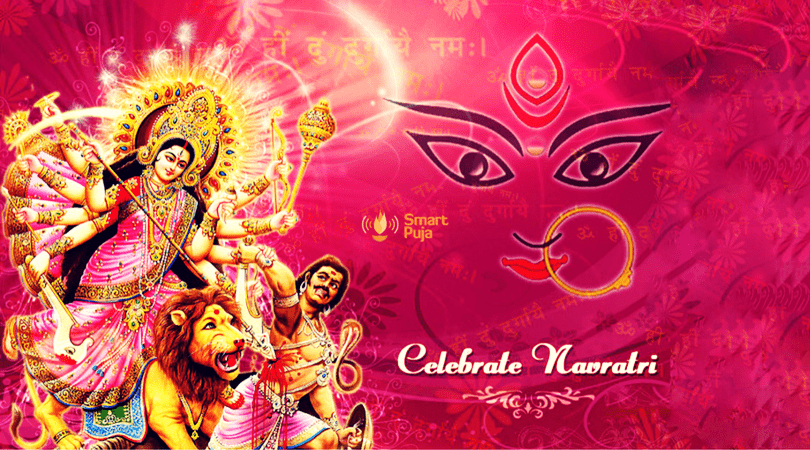 Most auspicious of all auspicious, Parvati, Who fulfills all desires|
Refuge of everything, Three-eyed, Devi(Parvati), Lakshmi, We salute you ||

This sloka from the scripture Devi Mahatmyam describes the powers of Great Mother Durga. Shri Devi Durga is mother of all powers and represents the oneness of Lakshmi and Parvati. She gives us material prosperity (bhoga) as Lakshmi. She provides us liberation (moksha) as Parvati. Your prayer goes to the same power,no matter whom you pray,whether it is Lakshmi or Parvati. Shridevi Durga is that power who bestows you with whatever you ask for with complete devotion and faith.

For every night of the Navaratri, nine forms of Goddess Maa Durga – Shailputri, Brahmacharini, Chandraghanta, Kushmanda, Skanda Mata, Katyayani, Kalratri, Maha Gauri and Siddhidatri are worshiped by the devotees.

Navaratri is celebrated all across India

Navaratri, Navaratras or Durga Puja are the different names, different idols, with different manner of celebration. However the underlying theme remains the same. It is the celebration of Good over Evil, of the greatness and valour of Devi Durga, the giver of Peace, Prosperity and well being of the mortals. 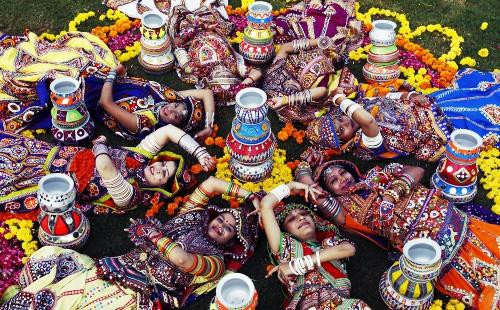 Gujarat
Navaratri is celebrated all across India, the festivities are at fever pitch in Gujarat, West Bengal and Mysore. The Navaratri festival is celebrated in Gujarat with the legendary unique folk dance form, Garba. It is the longest public dance festival in the world. It goes on non-stop for nine nights, millions of devotees fantastically costumed,sway in a fusion of dance and devotion. They dance in a circular form keeping Goddess Amba’s statue/picture in the middle. 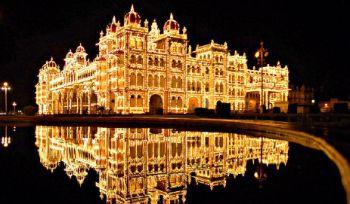 Mysore
In South India, during Navaratri, people arrange idols in a step pattern and invoke the name of God. In Mysore, Jamboo Savari a traditional Dasara procession is organised. The main attraction of this procession is the idol of the Goddess Chamundeshwari which is placed in a Golden Howdah on the top of a decorated elephant. On Dussera night, the Mysore palace is fully lit displaying its opulence and resplendence. 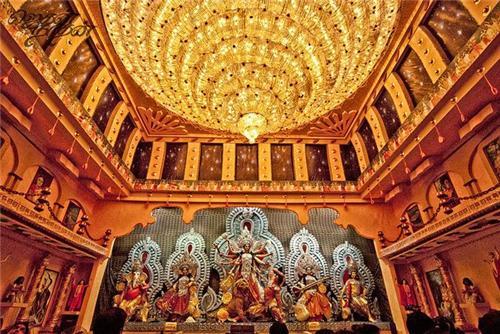 West Bengal
Durga Puja is the most glamorous, most popular and largest festival of West Bengal. No other Indian city celebrates Durga Puja as enthusiastically as Kolkata. Many Pujas in and around Kolkata buy their sculptures from artisans and are decorated in pandals. In Kolkata and its suburbs more than 4000 pandals are set up, all clamoring for the admiration and praise of the populace. The city is adorned with lights and the vibrant nightlife is the most exciting thing to experience during the Puja.

The Vaishno Devi shrine in Jammu witnesses a massive surge of devotees during the nine-day festival of Navaratri.  On an average  about 40 thousand devotees arrive  in Katra, the base camp , for their onward pilgrimage to Shri Mata Vaishno Devi Shrine.

The ultimate triumph of good over evil 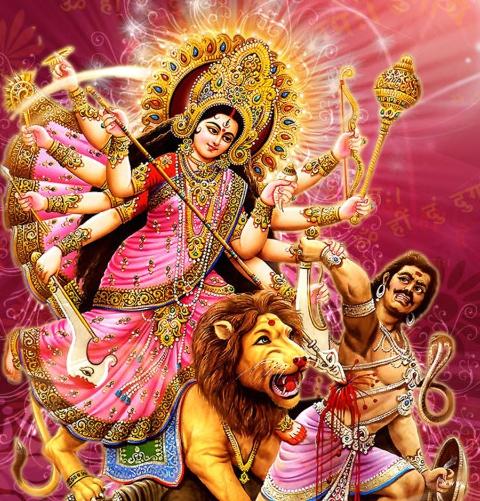 The festival of Navaratri culminates in Mahanavami. On this day Kanya Puja is performed. Nine young girls representing the nine forms of Goddess Durga are worshiped. The holy festival of Navaratri is an amalgamation of various themes, with the common theme of the victory of good over evil. According to some legends, Vijayadashami or Dusshera is celebrated on the day Lord Ram kills Ravana. Demon king Mahishasura had Lord Brahma’s boon that, he would be unconquerable by any male form. According to a Puranic legend, the mighty demon defeated the gods and their king, Indra. They then approached Brahma, Vishnu and Shiva, who decided to destroy the demon. So they all combined their energies, and gave rise to Shakti and appealed to Goddess Durga to come to their aid. Durga equipped with lethal weapons and riding a ferocious lion, in all her awesome majesty, destroyed the evil one without much ado. The 10th day, on which the goddess kills Mahishasura, is celebrated as Dusshera or Vijayadashami as the victory of good over evil. 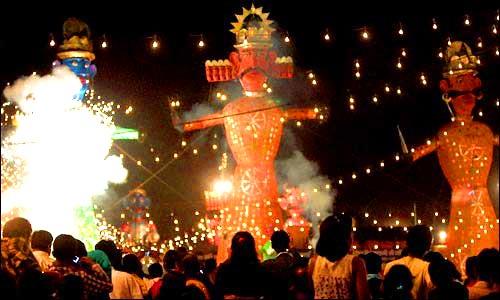 On the tenth day, the Vijayadasmi day, colossal effigies of Ravana, his brother Kumbhkarna and son Meghnadh are placed in vast open spaces. Rama, accompanied by Sita and his brother Lakshman, arrive and shoot arrows of fire at these effigies. The result is a deafening blast, enhanced by slogans of triumph. On this day in the famous Ramleela grounds in Delhi, huge effigies of the ten-headed demon king Ravana, Meghanath, his son, and Kumbhakarna, his brother, stuffed with explosive materials are torched by an arrow to symbolize the ultimate triumph of good over evil. The burning  of the effigies symbolizes our responsibility to burn the evil within us and thus follow the path of virtue and honesty.